We at Cairnisle are So Proud to announce  that our Old Girl "Pippen"  BISS CH Bonniedee Lady of Starlight, won Best Veteran in Specialty as well as Select Bitch at the CTCC National Specialty 2015.   This was a special weekend for us as Pippen had not been in the ring for a few years since her surgery on her back leg left her with a slight limp. She seems to have overcome this now and loved being back in the ring, and charmed all she  met! 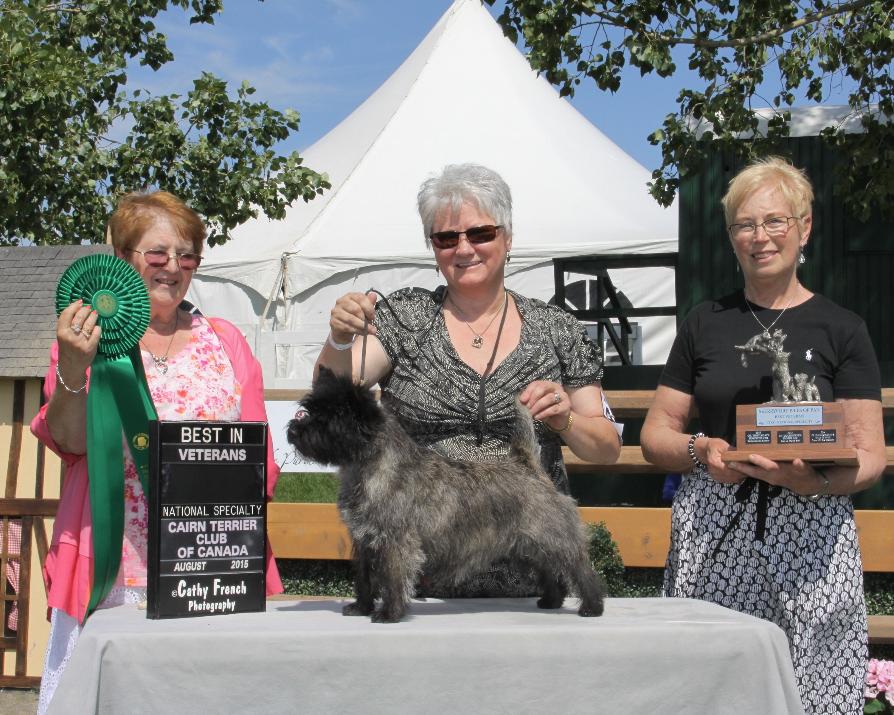 October 27, Lower Mainland, Pippen goes  Best Opposite Sex at the Cairn Terrier  Club of Canada National Specialty, under Judge Ken McDermott.  We are very proud of this Win. 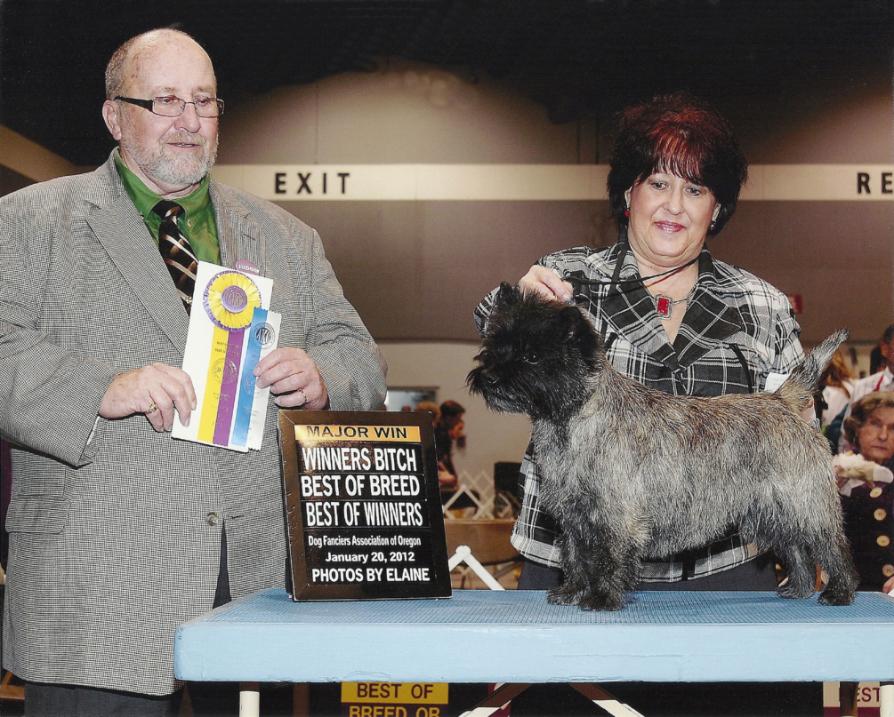 Pippen is pictured winning her first Major and Best of Breed over American Specials in the USA  handled by Joanne Noffsinger  under Judge Ken McDermott.  Mr Mcdermott is a highly esteemed Terrier Judge, and was very favorable in his comments about Pippen.

It was a productive weekend, with Pippen winning Winners Bitch 2 days later, for a total of 7 points in total all weekend.  She is almost half way through to gaining her american Championship. 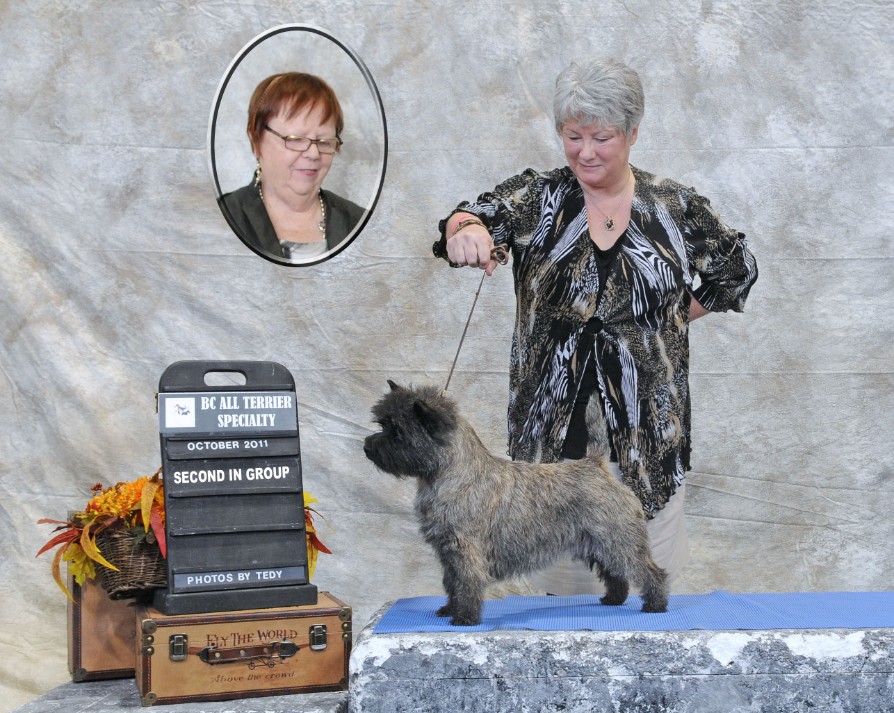 We would like to thank Judge Betsy Dale for awarding Pippen a Group 2 at the BC Terrier Specialty, at the Lower Mainland Dog Show, October 2011. 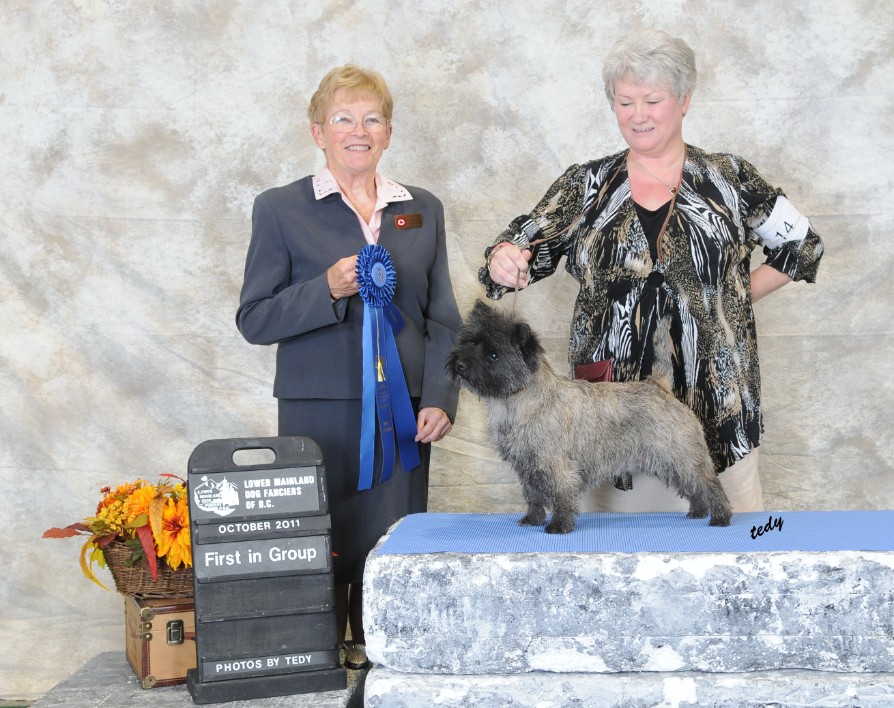 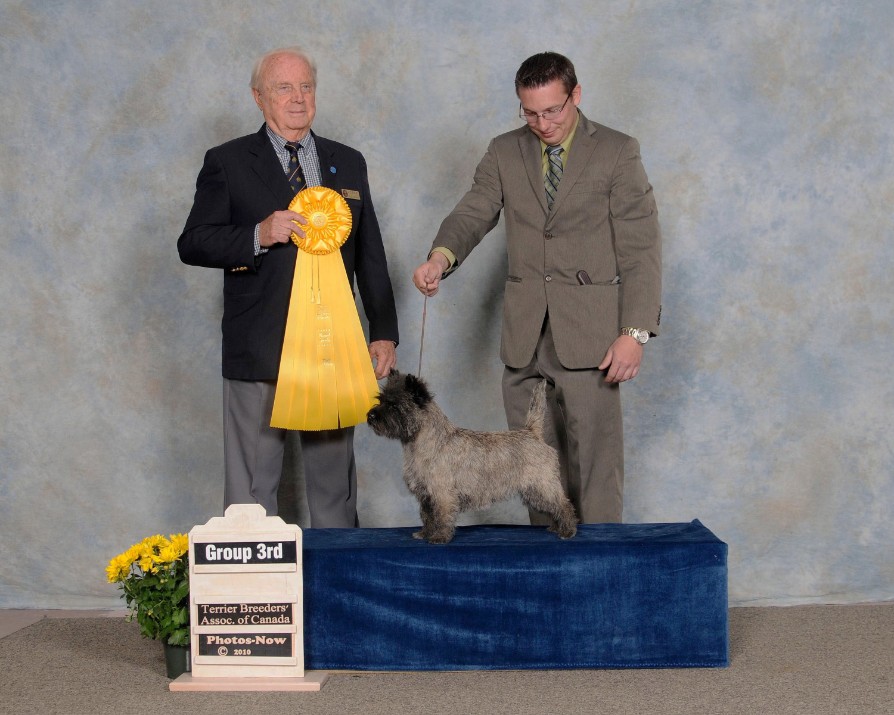 Last weekend at the NACA shows in Edmonton Pippen won a Group 3  in the Terrier Specialty under Judge  Ralph Scoggins. Pippen was shown by Aaron Andriash to her win. 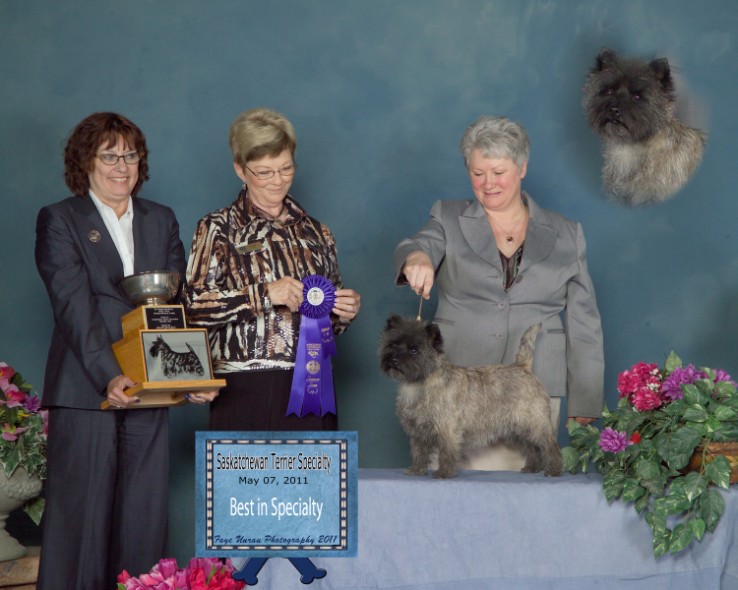 Group 1 and Best in Specialty show Under Judge Diane Ivey.

We wish to thank all the Judges for their support of Pippen.

Pippen is Currently # 1 Cairn in Canada according to www.canuckdogs.com stats. 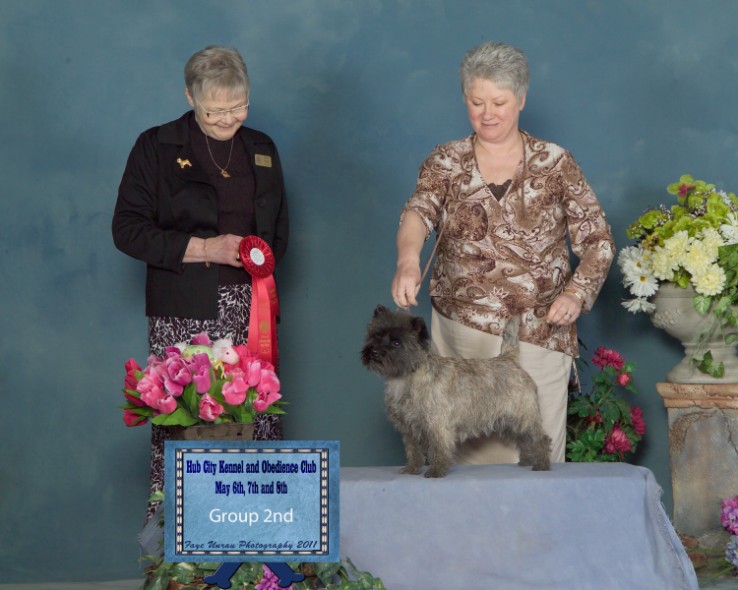 Thank you so much Edna!! 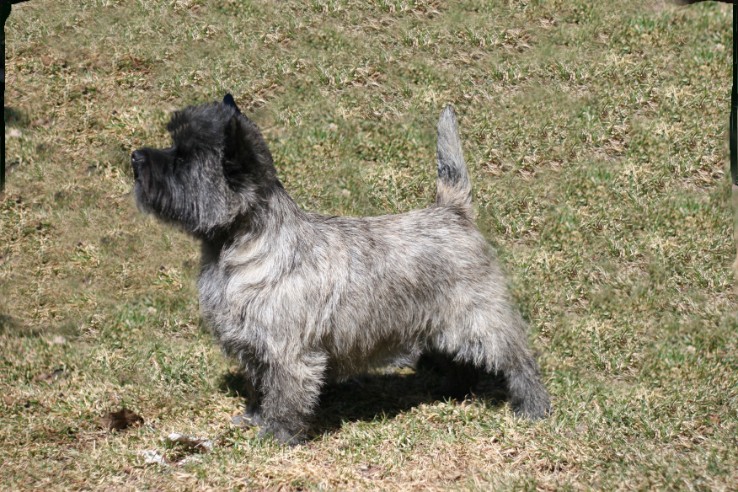 This Year is a challenge. We have a very tough Terrier group in Alberta. Pippen Is in wonderful Coat, and is an extraordinary Cairn.  But most fall in love with her oh so typical Cairn expression.  A Cairn should express confidence, mischievousness, and be an active, hardy dog. This girl has it all!  Thanks to all the Judges on recognising Pippen's outstanding qualities! 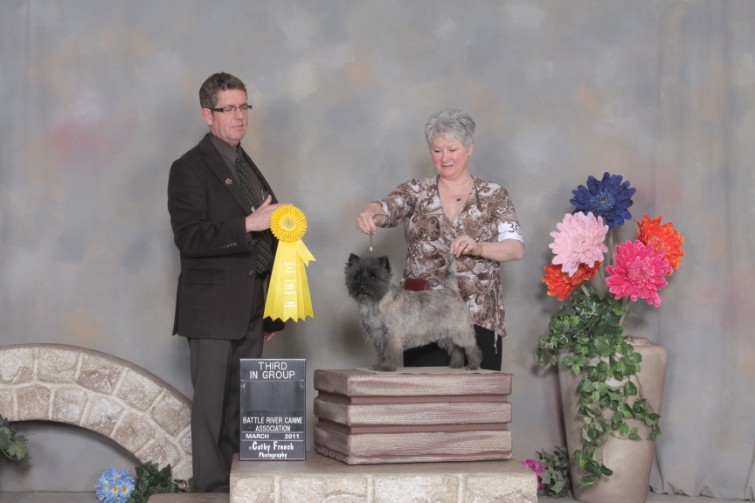 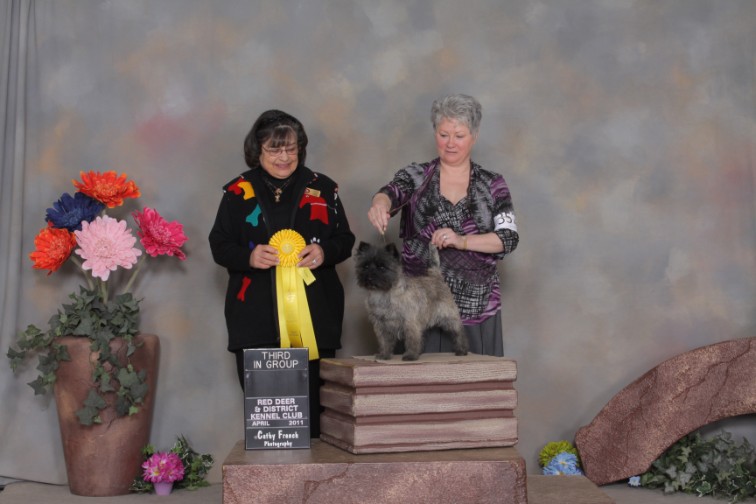 Pippen wins Group 3 under Judge Lynda Berar at the Red Deer Dog shows April 2011.   Thank you so much Lynda!!! 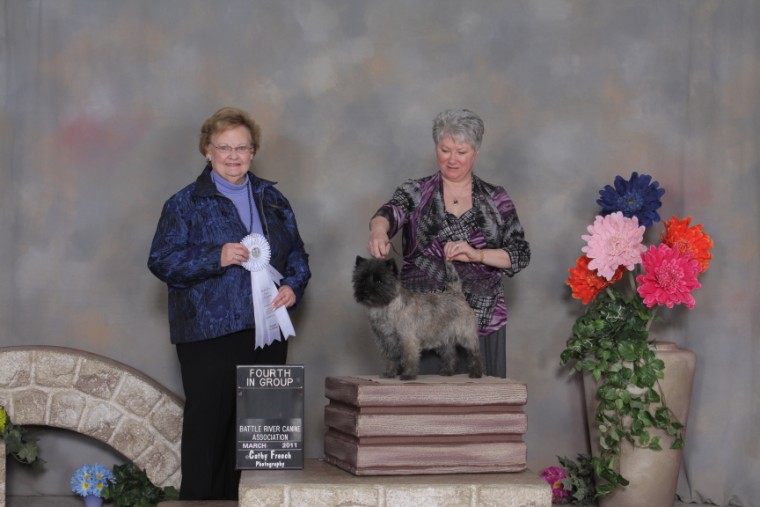 Pippen Shown winning a  Group 4 under Judge Judy Webb and Group 3 under Judge Bruce Fraser this last weekend at Camrose Alberta,  We are so proud of our little girl Pippen 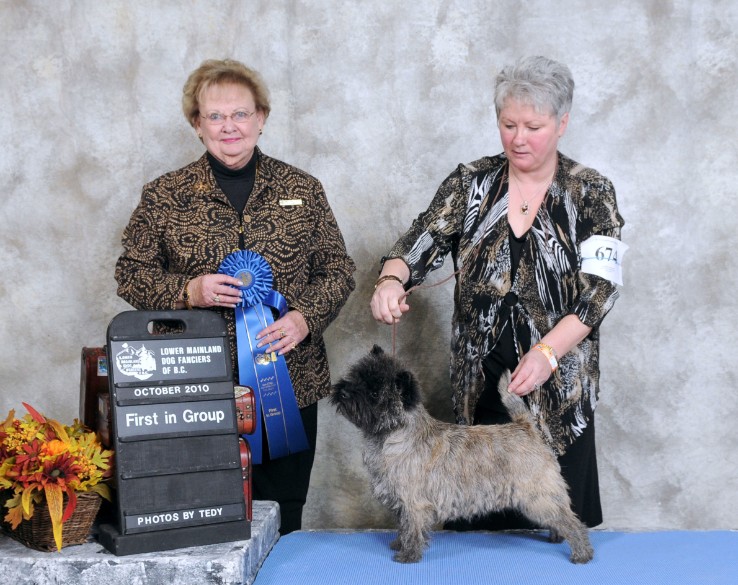 We are so proud of Pippen and her accomplishments after 2 weekends out, she is awarded a Group 1 at the Lower Mainland Dog Show in Abbotsford B.C.

Pippens First weekend out in 1 1/2 years and she wins Best In Specialty!

Thank you Jeannette for helping me out, and showing Pippen for me at the Specialty. You two really Clicked!